Industry 4.0 and the Promise of Smarter Operations Using IoT

Is the Internet of Things (IoT) getting smarter? That is often how “Industry 4.0” is described, as digital technology is deployed in production or other industrial processes to take advantage of advanced platforms and devices (including analytics, automation, and artificial intelligence). Differing from machine-to-machine (M2M) solutions that use network connectivity simply to monitor the condition or location of an object, Industry 4.0 goes further to describe applications which actually control or operate connected things via networked connectivity. While sometimes the connected “thing” refers to newer machines and devices such as robots, autonomous guided vehicles (AGV), or augmented and mixed reality (AR/MR) headsets worn by industrial workers, the “thing” might also refer to core production equipment that has been installed for decades. Either way, the aims of Industry 4.0 remain the same: connecting machines to provide essential information and insights to allow companies to make smarter decisions, automate processes, and reach specific ROI goals related to efficiency and cost control.

IoT for Industry 4.0 in the Field

While the concept of Industry 4.0 has been around for several years, development of technology solutions leading to actual market adoption has advanced more gradually. In GlobalData’s IoT Deployment Tracker, which gathers intelligence on how IoT is being used by enterprises in the real world, such deployments have started taking off in the last two to three years. Looking at the chart below, it could be tempting to say that IoT is getting smarter. But conceptually speaking, it’s not necessarily the Internet—or the things—that are getting smarter, rather, it’s the industrial organization and its operations. Which is why Industry 4.0 is such a useful and on-point term. 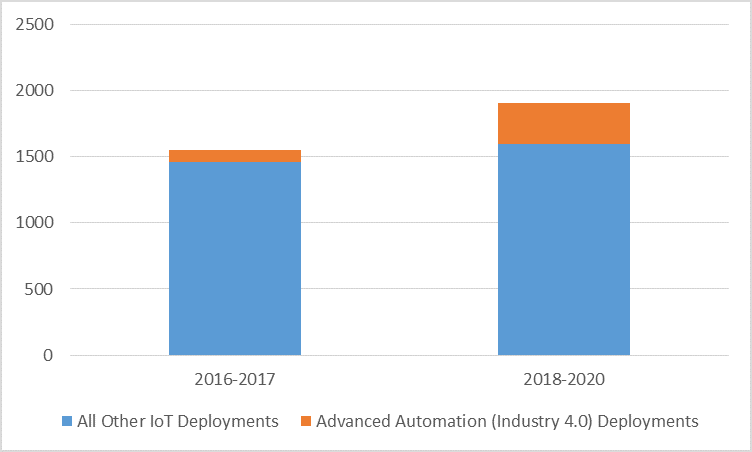 Nissan’s global production facilities include 9,000 connected assets and more than 30 different machine types including robots, conveyors, drop lifters, pumps, motors and press/stamping machines, all of which are remotely monitored using machine learning algorithms to reduce production downtime by up to 50 percent. Manufacturers like Nissan account for more than half of enterprises deploying advanced automation IoT solutions for Industry 4.0, while utilities, energy, and transportation (including ports) account for much of the rest. At Europe’s largest port in Rotterdam, for example, authorities are using IoT to prepare for autonomous ships, and in the meantime to ensure vessel traffic in the port can be managed more efficiently to maximize cargo loading capacity.

In many enterprises, though, operational machinery is already networked for traditional industrial control systems. Marrying advanced automation with existing industrial processes is what will keep Industry 4.0 deployments accounting for even more of the global IoT deployments tracked by GlobalData over the coming years.

Industrial control systems can connect temperature sensors and analytical instruments in factories and plants or help utilities manage smart grid distribution. By upgrading operational technology (OT) monitoring with programmable logic controllers (PLCs) and the right software, industrial organizations can achieve new levels of automation of their operational processes using IoT. SA Water in Australia upgraded its waste water treatment plant's aging SCADA system using Ethernet connectivity and PLCs from SAGE Automation to optimize processes that save energy while delivering long-term business improvements. Wilmar Sugar, also Down Under, did the same, streamlining its control systems and improving operating safety, efficiency and productivity in its plant. By deploying PLCs that enable the reading and interpretation of sensors near connected devices, organizations can activate and monitor thousands of machines across remote locations communicating via existing OT systems like SCADA.

IoT smart gateway deployments that support upgrading legacy control systems with new automation capabilities can be quite complex, incorporating connectivity management, gateways, application enablement platforms, and any number of different wired or wireless sensors or other end devices along with PLCs—as well as fixed or wireless network connectivity. With the trend toward edge computing for lower latency and higher availability for real-time application support, gateways like RAD’s SecFlow-1v support much more than the networking functionality, by including a server,  an integrated PLC and optional 4G cellular modem in  a ruggedized, compact form factor, thereby reducing the number of boxes required. Limiting the risk of adding layers of complexity to mission-critical applications while guaranteeing security, reliability and stability are always going to be the enterprise’s top priority.

Looking at some of the recent Industry 4.0 IoT equipment deployments in GlobalData’s tracker, we expect to see more and more examples of adding intelligence to existing industrial control systems in 2020 and beyond. Whether it’s a pharmaceutical company implementing an integrated automation strategy throughout manufacturing phases to improve operational efficiencies and reduce cost, or a water utility replacing its SCADA system to prevent service interruptions through real-time control and monitoring with advanced applications, industrial organizations are increasingly looking at IoT to help them control and operate, rather than simply monitor, their industrial processes. So whether IoT is getting more intelligent or not, there’s no question it serves as the enabler for making existing operations and processes smarter.

GlobalData is one of the largest data and insights solution providers in the world.

Why Industry 4.0 Needs an Intelligent Edge