In part 1 of this blog post, we discussed timing in the context of 5G networks and explained why timing requirements in general would become even stricter in 5G in comparison to the previous generations of mobile networks.

In this part, we would like to focus on the means to achieve the required timing accuracy goals. In particular, we would like to discuss the distributed PTP Grandmaster (GM) concept that is usually also associated with PTP-GM miniaturization.

What is Distributed GM and why, in many cases, it is the only viable solution?

The concept of Distributed GM or, as it is also referred to sometimes, edge GM is quite old. Around the years 2011-2012, when the ITU-T SG 15/Q13 started to address time distribution (until then, most of the its work was dedicated to frequency distribution), it became clear, already at an early stage of the work, that a paradigm shift with regards to PTP time distribution will need to occur.

The existing frequency distribution using PTP (i.e. ITU-T G.8265.1 telecom profile), relied on a central PTP-GM, located in some central location in the network, sending unicast IP/UDP PTP packets towards a group of PTP slaves, usually embedded within the mobile base stations or collocated with them. The job of the edge PTP slaves was to ”clean” the PDV noise introduced by the intermediate packet network and regenerate a clean and accurate reference clock towards the air interface. As the process of frequency recovery is indifferent to the fixed delay asymmetry[1] introduced by packet network, relying on an end-to-end PTP distribution over PTP unaware networks (no PTP on-path support like BC and TC) still worked well in most cases. The distribution of time, on the other hand, is very much sensitive to fixed network asymmetry. Actually, with time distribution, the bottom line time error at the slave’s output, will at least comprise half the fixed network-introduced asymmetry experienced on this specific path. That is a physical lower bound that cannot be removed by any technology or “smart” algorithm at the PTP slave. The only way to remove it is either to measure it in advance and compensate (a formidable task especially in large networks) or use full PTP on-path support (e.g. PTP-BC) throughout the entire distribution network.

Introducing full on-path PTP support is a considerable undertaking that involves relatively high operational and capital efforts and expenses. But, worse than that, even with the advent of 5G networks, a lot of MSPs would still rely on wholesale transport services for their mobile backhaul. Most of these wholesalers do not support PTP on-path mechanism (i.e., BCs/TCs) today or in the foreseeable future, which renders the full on-path PTP support solution irrelevant.

Going back to the work at the ITU-T SG15/Q13, these problems were already understood and identified at an early stage. Furthermore, it was recognized that for some network scenarios, where on-path PTP support cannot be achieved, the PTP-GM themselves will need to make a “transition” and move further down in the network towards the base station (hence the term “Distributed GM”). Operating closer to the end-application would help controlling network fixed asymmetry (and PDV) to levels that allow adequate PTP time recovery. Nevertheless, this solution ultimately means a much higher number of PTP-GM will now be needed. As a result, their size, power consumption and cost will need to be markedly decreased.

MiCLK is a fully featured PTP-GM in an SFP form-factor. It can be plugged into a standard SFP/SFP+ port in any type of telecom equipment (e.g. a router, switch, OLT, DSLAM) through which it can transmit both Sync-E and PTP signals towards the network. On its other side, MiCLK is connected to a standard GNSS roof antenna to receive its GNSS time reference. MiCLK provides the DC power required to operate the antenna so no additional RF splitter is needed. In networks that already have Sync-E support, MiCLK receives the Sync-E clock from the network (via the SFP port) and uses it to hold over its time in case the GNSS signal is temporary lost. MiCLK supports all the existing to-date PTP telecom profiles defined by the ITU-T. Protection against a temporary GNSS failure can be achieved either via receiving Sync-E clock from the network or using APTS (Assisted Partial Timing Distribution). Managing the MiCLK is performed as any standard telecom equipment. 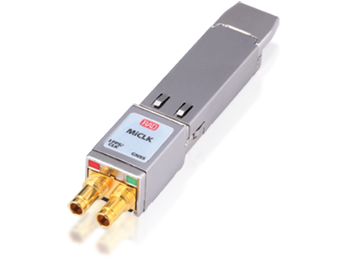 MiCLK and the new 5G xHaul

As can be seen in the below figure, MiCLK’s small size and power savings will allow its positioning ever closer to the transmitting end-points, making it perfect for 5G backhaul networks that does not support PTP. A MiCLK located at the entry to a small fronthaul cloud would provide an excellent relative time distribution solution for that cloud, assuming the fronthaul transport technologies support some type of PTP on-path support. Furthermore, advances in GNSS reception technologies provides GNSS time reference accuracy far better than the guaranteed sub +/-100 nsec. Hence, the absolute time error between different fronthaul clouds would typically not exceed +/-80 nsec compared to the guaranteed +/-200 nsec[2]. With MiCLK, the new xHAUL expected mesh architecture will also provide an even better DGM protection solution where, as seen in the figure below, a group of MiCLKs can be connected in a “cross-over” manner to allow mutual APTS support (reducing the need for a central APTS distribution). With such a GNSS outage protection scheme, a temporary GNSS failure at one of the MiCLKs would immediately and automatically be backed-up using an APTS flow from the other working MiCLKs. RAD’s MiCLK provides an excellent relative timing solution with advanced GNSS outage protection and is ideal for the 5G xHaul and small-cell clouds.

[1] Time distribution becomes a trivial problem of measuring roundtrip delay and dividing by half, in a completely symmetric network path. It is the network-introduced delay asymmetry that impacts the distribution and ultimately degrades the recovery performance. It is usually beneficial to divide the overall introduced asymmetry into 2 components: